How things have changed. Over 110 leaders told us so at the COP15 conference on climate change in Copenhagen. But listen closer and there are significant differences in perspective. Listen closer still and other aspects emerge, possibly dwarfing the current scenery. But first some background information.

An idea, if based on observations of the real, is created by cognitive processes that are grounded and contain formally described content. Its adherents communicate on a similar level of complexity and are able to share the information because their semantics are situated within a common framework.

Once that idea propagates away from its source it becomes subject to the modification, re-interpretation, and re-processing generated by others, that is those who did not assemble it in the first place. At that point agendas from different directions, emotions from differing contexts, and references from other sources begin to assert their influence. Depending on the contextual distance between the source and the newcomers that original idea morphs into something else - still relatable to the origin but now reflecting the owners of such influences.

In Copenhagen we witnessed the results of climate change theories having been transposed into the thicket of political agendas. The 194-nation summit produced suspicion from developing countries, aggressive demands from climate change activists, and vague relief from rich nations that the entire exercise had not collapsed altogether.

Let's put that another way. Demographics of low complexity with dysfunctional political and organisational structures prompted their representatives to safeguard the existing flows of funds that have come their way over the past few decades and are the props that allowed them to survive against the odds. Any initiative, especially one that rests on an agitation of global proportions, is translated into reasons for additional outside finance because that's how it has worked so far.

Demographics defined by their newly-found common ground shunted together from feelings of guilt about being rich, alienation from high-complexity life styles, and obsession with victimhood on a grand scale, see the suggested effects of climate change as the reason par excellence to justify their existence.

Industrialised nations, their political leaders the end result of the democratic processes that churned through the cumulative make-up of their constituencies, need to play the role they had been elected for. They speak on behalf of high-complexity societies which, through their sheer capacity across the spectrum of societal strata, produced the original ideas underpinning the debate and are also the source of the money that led to the dependency of donor recipients.

Just what kind of money we are talking about can be gleaned from the following two graphs, the first showing the Gross Domestic Product (GDP) of the G7 nations (the US, Germany, UK, France, Japan, Italy and Canada), and the other the official development assistance (ODA) from the G7, over the years 2004 to 2008 (they have grown into the G8 of course, but those data were not comparable). 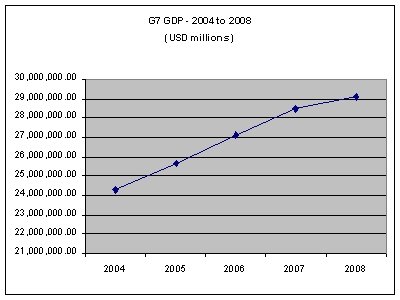 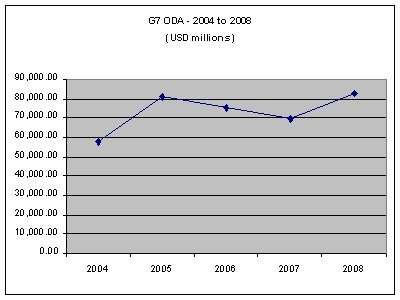 Two main points can be made. One, over that time a total of USD 365,867.32 million has been provided. It was made possible through economies that produced a combined GDP of USD 134,640,400.00 million, based on the same industry and technology that has been roundly condemned at the conference for "killing" the people of developing countries.

Two, ODA figures do not follow the GDP. Other influences determine how much aid is given, therefore ODAs are subjected to considerations other than sheer wealth. What these are depends on local and international factors, and the resources needed for a response to climate change would certainly be one of them.

At Copenhagen "100 billion dollars" were promised overall for poor nations, with the US wanting to contribute 3.6 billion for the 2010-2012 period, Japan promised a total of 11 billion dollars and the EU 10.6 billion. It can be assumed the amounts refer to global warming initiatives and are in addition to what is paid 'naturally' already.

With such figures being thrown around is it too cynical to suggest that the main reason for the angry behaviour of Third World delegates is the attempt to fight it out for a maximum chunk of that money?

Also in the news was the plight of island nations who are increasingly worried about rising sea water levels. Damage there is being done right now so their concerns are justified. Let's focus on three countries that were mentioned, the Maldives, Fiji and Tuvalu.

Given the demands made at COP15, clearly the aid available right now is not considered of importance when it comes to planning for the survival of an entire people.

Under the perspective of cognitive dynamics we see progression locks (a mind set has been generated that now determines the direction of any further considerations) and the transference of contexts from high-complexity systems to low-complexity ones (a developed nation decides upon a certain volume of resources relatable to its framework and the resources get translated into the priorities existent at the receiving end). A similar scenario has been described in the article Aiding the catastrophe: Africa and its disastrous consequences if nothing changes in the overall culture.

The populations of low-level islands would hardly be left to drown should the predictions come true, but the only option would be to relocate them to other countries. The possibility to move to areas of similar demographical composition does not seem to have occurred to anyone, the focus being firmly on developed nations such as Australia.

In a series of reports broadcast on SBS television during the conference residents of Tuvalu talked about their wish to move to Australia so that they can continue to preserve their culture (however, it also has to be said that in those interviews the prime minister of Tuvalu, Apisai Ielemia, spoke of the endeavours of his citizens to train up so that they won't be a burden to their host country). From their point of view no doubt desirable, but from the perspective of human activity systems less so. Tuvalu culture, whatever its good points, proves to be no match for a radically changing world. Australia's culture, far more complex and therefore resourceful, does. Any addition to the latter's social fabric would have to be relevant to the ongoing needs and demands of the challenges ahead.

Should it come to a relocation of so many people around the globe the potential for conflict rises in accordance with the pressure at the time and their relatively inflexible cultures. Not only would it be of concern to those on the move, their new hosts face the very real danger of becoming unstable as a consequence.

What adds to the problem is the current reluctance of the West to even contemplate what the inherent characteristics of differing cultures actually mean. The system of mind (even an artificial mind in the computer) can be defined by the number of functional elements, their degree of connectivity, their potential variance of internal states, and the quality of data going in and out. In the case of the individual brain these would be the neurons, their synapses, the protein formations inside the cells, and the information available to the senses. At the level of society and/or culture it translates into the number of people, how they connect with each other, their ability to think and the knowledge they pass around. Superficial appearances such as skin colour, hair, or dress don't come into it (although they may well be a byproduct of their culture).

Since Western nations rely on democratic processes to formulate their policies, what and how the constituency thinks matters greatly. It may have been a nod to the emotional and simplistic element in their midst that prompted the presentation of that rather ridiculous video in which a young girl has nightmares and looses her teddy bear while running away from a cracking earth and a flood. Kevin Rudd could not resist using a young girl of his own while urging for action (possibly another nod to female voters - why not use a boy as the archetypical threatened innocence for a change; if one must).

The clustering of ideas and their spin-offs makes them a target for separate interests, whether niche or mainstream. Not many rock-throwing protesters would have come from the ranks of biologists, meteorologists or paleo-climatologists, and it is debatable whether they would understand the concept of a dew point let alone the physics involved when debating the ultimate veracity of the climate change model. Articles such as Greenhouse Gas Hypothesis Violates Fundamentals of Physics or Falsification Of The Atmospheric CO2 Greenhouse Effects Within The Frame Of Physics requires a background knowledge not many of us have (myself included). At the same time we - the masses! - find reiterations of the looming dangers we are meant to respond to intelligently. Even with the IPCC reports behind us it is a daunting task.

From a cognitive point of view (represented on this website) it is clear that references to say, two degree targets of warming and 450 parts per million concentration of carbon dioxide in the atmosphere constitute a distance between what most can conceptualise and what an effective response would be that is far too great to remain meaningful. Yet it is the meaningful dialogue and the resultant decision making process that at least offers a stable future.