Win 10, 64-bit;
2GB of memory minimum, 4GB or more is better;
web cam with microphone, loudspeaker(s) (OCTAM uses the default settings for these devices);
... and a nice big monitor with high resolution!

Alternative: On computers with a slow CPU, small onboard memory (eg 1.6GHz, 2.0GB RAM) and/or no special graphics card the program as installed by octamsetup.exe may encounter problems, such as ShapeWorld audio not being initialised, or some of the shaders for ShapeWorld not processed properly (limited hardware invites a host of problems anyway). In that case download otoomnet_slow.zip (32.4MB) and extract the contents to your disk. Create a link to otoomnet_slow\octam\OctamWPF.exe to run the program. This version tests the onboard memory only halfway through and the maximal deployment of the AI Engine is substantially reduced.

Audio - no sound (possible error message "1 XAudio2 not created"): Depending on how the user's Administrator privileges are set up, the program may not be able to register the bridging file with the operating system when starting OCTAM. As a result the XAudio2 module cannot initialise properly, hence no sound from ShapeWorld. Depending on how quickly the operating system is able to respond an error message of the kind above may be displayed as well. Solution:
•  with OCTAM not running go to the program's install folder, for example c:\otoomnet\Octam, and find the file otoomnet\Octam\XAudio2_7_32.dll;
•  open the command prompt window as Administrator: Windows-key + X → Command prompt (Admin);
•  at the prompt move to the install folder, using the above example type cd c:\otoomnet\Octam → Enter;
•  at the prompt type regsvr32 c:\otoomnet\Octam\XAudio2_7_32.dll → Enter;
•  you should see a success message that the file has been registered;
•  if an error message with code 0x80070005 comes up, the operation was not performed with Administrator rights.
From now on OCTAM can be run and XAudio should be able to communicate with the operating system.


Immediate steps if running the program for the first time:

Once the Commence operation button is clicked, there could be any of three simple things that need attention:

•  Resizing some of the windows. Once done, Select windows resizing ON in the Main window, bottom left, can be unchecked. The adjustment is stored.

During initialisation the maximal layout of the artificial intelligence engine (the AI Engine) is tested for. Not all menus are available at all times. Just about all menus and/or descriptors feature tool tips.

The following screenshots have been reduced in size. 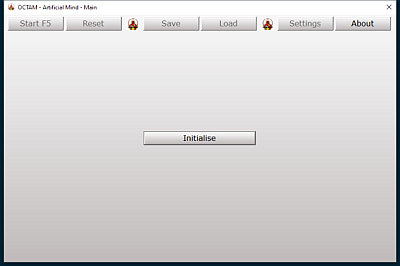 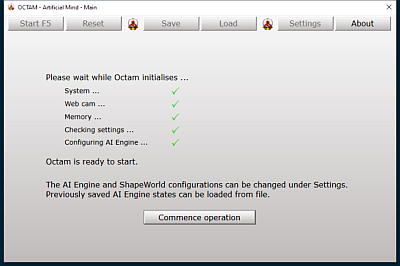 (a) Start screen
(b) Initialisation complete, ready to start operation 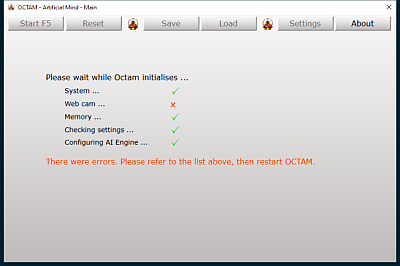 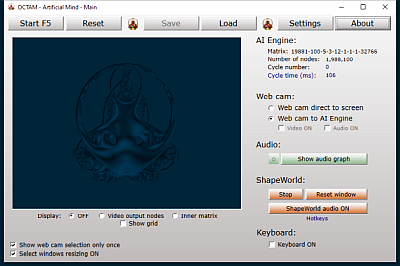 The larger the deployment of the AI Engine, the longer the cycle times on any given machine. The lower the CPU/GPU speed the longer it takes for the AI Engine and ShapeWorld to initialise. See Tests for some of the node numbers with their possible cycle times.

Presets:
For audio profiles and textures there are a number of presets available to make the selection of parameters easier.

The audio profiles have the *.aiio extension, texture files the *.gftex. They can be found in the \user_gen subfolder of where the program has been installed; for example, using the default folders, in c:\otoomnet\octam\user_gen. From then on any user-generated files can be stored in a folder of the user's choice.

burncopper_tex.gftex   a texture resembling burnished copper;
crystal_tex.gftex   a crystal-like surface;
darksea_tex.gftex   some 'dark sea' colour;
gold_tex.gftex   gold texture;
silver_tex.gftex   silver texture;
tropsea_tex.gftex   an azure-like colouring scheme;
To load them, go to the Settings window → ShapeWorld tab and click the Load texture button under the Textures section at the bottom. They all can be further modified using the sliders.

And finally:
OCTAM represents a program constructed along non-linear behaviour, therefore the responses to any input (including many selections by the user) are not as direct as one would expect. For example, in a linear system setting a length variable to '10' would result in something on the screen now being '10'. In the non-linear version however that variable interacts with others all the time, so '10' could either be enhanced and/or mitigated by others; so much so that under certain conditions (defined by all the other variables) that '10' could turn even into a '20'. In a non-linear context such a result would be perfectly correct.

Initialise
Starts initialisation (refer to (b) to see what OCTAM checks for).

Commence operation
Appears once the initialisation process has been completed successfully (otherwise an error message appears as shown in image (c)). Click the button to bring up the basic options in the Main window.

Reset
Resets the AI Engine to the default configuration, less the acquired node states (no memory).

Save
Save node states to file.

For errors during operation please refer to Test and Error messages.

OCTAM needs to know how much of the computer's resources are available each time it is loaded. This is the purpose of the initialisation process. See image (b) above for the items OCTAM is checking.

It also involves testing the memory for the maximal possible deployment of the AI Engine at that time; this is not the same as identifying the amount of free memory on the machine. Also, the AI Engine and ShapeWorld modules are written in C++ and can access less memory than the rest.

If during initialisation a red cross appears next to an item there has been an error. If so, any of the following could have been the cause (>> suggested solution/s):

System:
Did not find some program-specific system files.
>> Reinstall OCTAM.

Memory:
Not enough memory available for the AI Engine. Minimum is 2GB, 4GB or more is better.
>> Close other programs; increase memory (RAM).

Checking settings:
The necessary settings to operate the AI Engine could not be applied.
>> Systems files are missing or corrupt, reinstall OCTAM.

Configuring AI Engine:
The final deployment and testing of the AI Engine has failed.
>> Systems files are missing or corrupt, reinstall OCTAM; part of the onboard memory is faulty, replace RAM chips.

See Functional overview for a general outline of its dynamics.

Further descriptions of the model can be found in FAQs and its links and OtoomCM program. A full explanation of the system of mind is provided in On the origin of Mind and the links from there.

While OCTAM uses the same engine to simulate cognitive dynamics, a number of processes have been added. Generally speaking, the program makes use of as much memory as there is available at the moment of loading.

OCTAM communicates with the user via web cam and a visual screen display, microphone and loudspeaker, and via the keyboard. For more details see Functional overview.

The configurations of the AI Engine and its operation can be adjusted within the limits of available memory. See Settings - and what they mean.

The current state of the AI Engine can be saved to file, to be loaded next time so OCTAM can continue where it left off. See Settings. These files can get rather large.

While the program is rather complex just about everything is automated. From Initialisation to Start there is virtually nothing the user has to be concerned about.

Nevertheless, there a number of parameters for each process and they all can be adjusted. See Settings.

Any processes not directly related to the operation of the AI Engine have been kept to a minimum. For example, graphic user interfaces (buttons, etc) are simple rather than elaborate because whatever resources are available have been dedicated to the AI Engine. Nodes are more important than resource-hungry GUIs.

OCTAM does not come pre-loaded or pre-programmed. It does not possess a data base, a dictionary, nor any algorithm which tries to anticipate what the user is possibly going to do. It is driven purely by chaos-induced dynamic states that emerge from input in terms of the affinity relationships among its nodes - just like the neurons in the brain.