Of frogs and things

Let's say a biologist researching frogs takes the following recording in a rainforest. It would be recorded on some device which uses the standard sample rate of 44100 Hz:

As you are listening, this wav file is played back on a device which also uses the standard sample rate of 44100 Hz.

It might, conceivably, be a sound that a frog could produce. Actually, the sound comes from an animated image (that is, scanning and retrieving the red-green-blue values of each pixel and putting those numbers into a wave file). Here is the image how it looks after the animation has finished:

We might call our source the Red-checkered Frog, or simply red frog.

The panel with all the settings in that program looks like this (at 87% reduction): 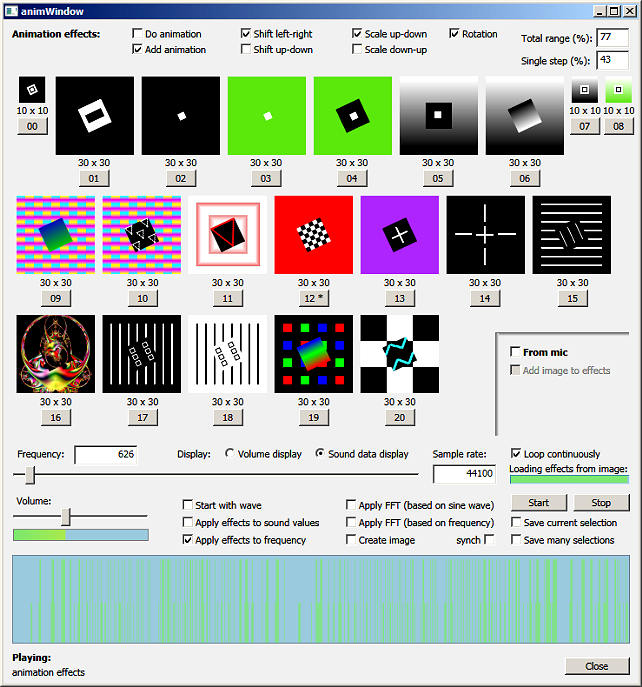 The image #12 is marked with an asterisk because that's the one being used. Notice the settings on top for the animations and the sample rate, 44100.

For sound engineers all this may be trivial, but is that all there is to it when it comes to AI?

Suppose we change our sample rate used in producing the sound from the same source to 244100 Hz. Now we hear this:

The duration is of course much shorter, and it still might be the sound a frog or some insect could come up with. However, the sound is markedly different. Already the changed sample rate makes itself felt because the sound that is sent to the speaker represents what is left over after we have chopped our entire wave form to suit the new rate. Indeed, any sample rate for that matter changes the original spectrum in terms of its setting; it acts like a filter.

If we lower the sample rate to 11100 Hz, this is what we get (remember, it's still the same old source, our red frog):

Longer duration, obviously, but now we have quite a little ditty. Could frogs be more melodious than we think?

Imagine we humans had the ability to understand sounds making use of an entire range of sample rates, then entering a forest what we would hear from all the animals could well be called a symphony!

Sounds, indeed any sensory information, are processed by the brain forming patterns amongst its neurons, and in association with other formed patterns (gestures, situations, contexts even) they give rise to our perception we have of our world. The feedback loops (from input to output, re-absorption of the result as a further input, and so on) lead to what we humans call understanding.

The same holds for animals in terms of their particular brain capacity, and further along the evolutionary line we have an artificial mind. It too absorbs and processes information; it too produces an output based on the results of those processes.

Note however that in order to say, "I understand" all the afore-mentioned steps have to be in place, and they all are in sync with the entire system comprising the senses, the brain, the feedback loops. Therefore we can never fully 'understand' a like manifestation observed in another organism, nor an artificial mind. The best we can do is infer from tangential interpretations in relation to what we would experience.

The same principle applies to a mother bird hearing the calls of her chick amongst thousands of others for example. It may not be as astounding as it, well, sounds. Perhaps the mother simply does not hear any other chicks, or at the very least only in a subdued fashion.